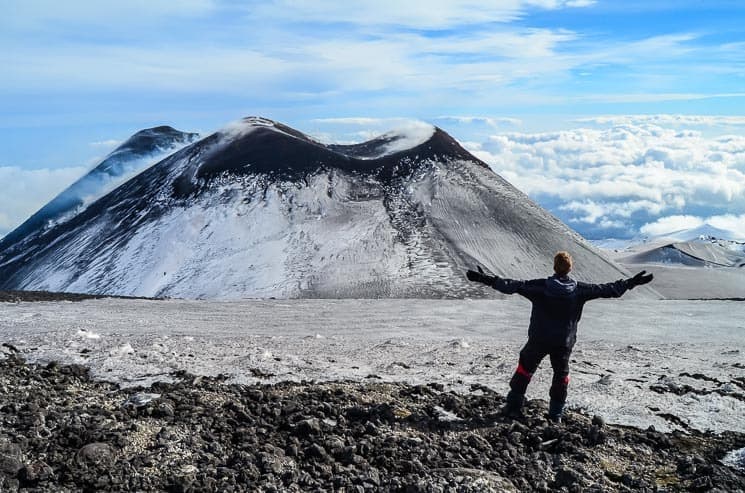 All you need to know for climbing Mount Etna Volcano on Sicily. How to get there? How long does it take? What to pack for the hiking trek?

If you do backpacking around Italy, climbing Mount Etna is one of the most interesting and adventurous things you can do. We can totally recommend it!

Mount Etna, still active volcano. I've been always tempted to climb it. I found a cheap flight ticket to Catania, Sicily in February and I told myself – why not in the winter! Two adventurous friends joined me and the adventure began! The first challenge appeared before we even started – we needed to pack everything into carry-on luggage, including sleeping bags, mattresses and a tent. It was tough but we managed to do it.

We got off the bus in Nicolosi town and our climbing Mount Etna started. We met a pack of wild dogs running and aggressively barking around and we relieved a lot after they finally left us alone. We met about 100 dogs on the way, at least 5 in each garden along the road. They were behind the fences fortunately except the first ones. We found a place in the woods where we built a tent and slept the first night.

The next day, the ground around us started to look like the lunar landscape. Morning climb was all on volcanic rocks and evening climb was all on snow. We saw Mount Etna peak for the first time – it was the best in the dark because even the red lava was visible. We enjoyed a bit of warmth in the restaurant with Wi-Fi in the evening and later, we climbed into a nearby forest to build a tent after sunset- it was a premiere for all of us to sleep right on the snow.

We started to cook dinner and several other dogs arrived – this time they were peaceful, so we didn’t mind. Just by then… As soon as we got into our tent, the dogs laid right next to us. We had such great guards ? It would be great if the guards didn’t bark every hour ? You can probably imagine how perfectly we slept ?

Fantastic views from the top

We left two of our backpacks in the restaurant in the morning and took the cable car that helped us to surpass 800 meters elevation (otherwise, it would be hard to make it to the top in one day). One way ticket cost 24 Euro (The all-day ski pass was 36 Euros). You can probably skip the cable car if you start the climb very early in the morning.

We asked about the conditions and if we need to take snowshoes. Of course, they told us that we can't go there without a guide. We told ourselves its just a scam and went without guide and snowshoes. We were almost the only hikers, but there were quite a few ski alpinists. Climbing was actually far more easy than we thought it would be.

The snow was hard enough that our shoes weren’t breaking down the snow and it was fairly easy to walk up. There was less and less snow as we were closer to the peak and the ground was getting warmer and warmer. The snow partly disappeared at the upper part and we were walking purely on volcanic rocks, where our shoes were breaking down much more than to the snow.

We were surprised by the very high volcanic activity of the crater – we thought it would explode just twice a day and the crater was splashing volcanic rocks every 10 minutes. ? It even splashed the red lava, once. At least by one crater. The other two craters were constantly spouting a sulfur smoke which we once accidentally breathed – never again! One would suffocate very quickly. The view from the Mount Etna summit was absolutely fantastic! We were above the clouds, so it seemed like we were walking in heaven.

The way down was probably the best part of climbing Mount Etna – we rode the mountain all the way down on Kluski (plastic shoe racks). There were absolutely ideal conditions and it was a once-in-a-life experience. A downhill ride, where one can go wherever he wants and doesn’t meet any people is incredibly beautiful! We rode from 3200 m all the way to 1500 m, where the snow slowly disappeared). Here is a short video of our night ride:

Is climbing Mount Etna better in the winter than in the summer?

The whole trip was absolutely worth it! Mount Etna climb was a once-in-a-life experience and we agreed that getting up is even better in the winter than in the summer.
What are the main advantages of the winter climb:

Check also this guide about Sicily in winter.

How to get to Mount Etna Volcano from Catania?

The easiest way is to fly to Catania, Sicily, where the cheap Ryanair flies. We flew from Prague with one transfer in Milan. Return flight tickets (only with carry-on luggage) cost about $90. One can also fly to Palermo, but it is on the opposite side of the island.

From the airport, there is a regular bus to the Catania city center and from there another bus goes to the villages at the foot of the volcano. One can go to Nicolosi, Ragalna, Trecastagni, Zafferana Etnea or directly to the lower station of the funicular to the Rifugio Hotel Giovanni Sapienza. We chose a bus to Nicolosi.

The timetables can be found at this website:
https://www.aziendasicilianatrasporti.it/

It's only in Italian, but It isn't a problem to translate it (click in the top menu on “linee e orari”). However beware, that the timetables aren't always correct, it is a good idea to be there in advance. Our bus left 30 minutes earlier.

How to get to Mount Etna Volcano from Taormina?

There is, unfortunately, no direct bus from Taormina to Etna. You will need to take a bus to Catania and transfer for a bus to Etna there. The easier option would be to take this organized tour to Mount Etna Volcano from Taormina. And if you have more time in Taormina, check this article about the best things to do in Taormina.

Where to sleep in Catania?

Hotels and hostels in Catania, which we recommend:

If you stay overnight in Catania, definitely try on of the best local dishes in Sicily.

Where to sleep nearby Mount Etna Volcano?

We chose a tent, and except for barking dogs, it was great. It can be built almost anywhere. For instance, we slept one night in the woods about 100 meters from the bottom station of the cable car. But it is necessary to have good sleeping bags.

Another option is a hotel Rifugio Giovanni Sapienza right at the bottom of the cable car, where they also have food and Wi-Fi.

How long does it take to reach the top?

The next day we got up to take the first run of the cable car at 9:00. The journey to the summit took us about 4 hours. We spent about an hour taking pictures at the top and then ode down. The downhill ride took us less than 2 hours, and we were around 4 PM at the bottom station of the cable again, just before the dusk.

We went to the restaurant to refresh ourselves and then continued to ride down in the darkness till the snow disappeared and we could build the tent on the dry ground.

Final day It took us about 2 hours to reach Nicolosi for a return bus.

What to pack with you?

The whole trip was an absolutely amazing experience! Seeing the Mount Etna volcano exploding so close and then ride the whole mountain down is really worth it! Go ahead and do it too!
If you are planning a trip to Mount Etna and have any questions, don’t hesitate to ask!

If you don't want to care about planning, navigation and some safety issues, you can take this Guided Mount Etna Excursion from Catania. It has great reviews!

Are you decided? Great, just find the cheapest flight ticket!

Have you been to Mount Etna before? We are thrilled to hear your experiences! Share your stories with us in the comments.

Pin climbing Mount Etna for later or for your friends:

What is the best guided tour to Mount Etna?

If you don’t want to care about planning, navigation, and some safety issues, you can take this Guided Mount Etna Excursion from Catania. It has great reviews!

How to get to Mount Etna Volcano from Catania?

From the airport, there is a regular bus to the Catania city center and from there another bus goes to the villages at the foot of the volcano. One can go to Nicolosi, Ragalna, Trecastagni, Zafferana Etnea or directly to the lower station of the funicular to the Rifugio Hotel Giovanni Sapienza.

How to get to Mount Etna Volcano from Taormina?

There is, unfortunately, no direct bus from Taormina to Etna. You will need to take a bus to Catania and transfer for a bus to Etna there. The easier option would be to take this organized tour to Mount Etna Volcano from Taormina.

Where to sleep in Catania?

Hotels and hostels in Catania, which we recommend:
The cheapest: Erika’s Home or B&B Cucchiara
More luxurious: Hotel Agathae

Did this post about climbing Mount Etna help you? Share it with your friends! It can help them too!