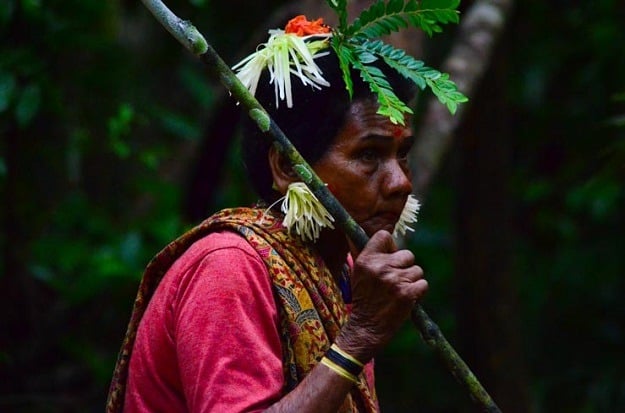 People of the Tribe of Malaysia are literally people of the jungle. Unfortunately, they were forced by the Malay government to leave the rainforest in 60‘. They used to live there in traditional shelters called ““. Although they were forced to leave the rainforest and move to the edge of the national park, Taman Negara, they still retained their beautiful natural culture. They are small, shy, smiling people and they have their own unwritten language.

I was a volunteer in Malaysia for Ecoteer organization and worked directly with Batek.

Barefoot in the jungle

What they enjoy the most is running through the rainforest, or at least around their village barefoot in the rain. There is no better way how to earn their respect than when you play a soccer on a muddy field with younger generation among the drops of the rain. It’s really fun! Running barefoot in the mud, sliding down. Well, almost no one resists falling. And what’s the easiest way to wash yourself? Just jump into the river.

The jungle is their home, they love the rainforest and nature more than anything else. They also believe in spirits of the forest and they have immense respect for everything that is living in the rainforest, including not that nice leeches. When I got into the jungle for the first time with them, our guide pointed out that we are not allowed to kill a single mosquito or even a leech. It would be a huge insult towards them.

Into the forest with flowers in hair

As a respect to the spirits of the rainforest and in the harmony with nature, women wear flowers in their hair. They literally never enter the forests without some flowers in their hair. Women also put the make-up on and wear their most beautiful clothes into the forest. They wear colorful things, except yellow – simply because yellow attracts bees. And of course, they walk barefoot in the rainforest!

Although they live in Malaysia, they don’t like Malaysians. They were forced to leave the forest at the same time as they were forced to convert to Islam – under the threat of death! But they stayed strong and kept most of their traditions. But unfortunately, they lost some of these traditions, such as funeral rituals.

Both men and women respect each other. Even despite the government’s efforts in Islamization, women kept their equal status. They were always nomadic hunters and gatherers so the role of both sexes has still almost this primitive scheme. Men were (some of them still are) hunters and women were/are gathering fruits. Due to attempts of Islamization some men tried to enforce polygamy, but they weren’t successful. The strong opposition of the whole village has stopped those efforts very quickly. Batek people don’t have any rituals for the wedding. They simply agree that they are together. They also believe that in case the woman would cheat on her “husband”, she would turn into a centipede.

How to cook in a bamboo?

This tribe uses bamboo for several purposes. Except building bamboo buildings, they make bamboo mugs and they are using it as a pot as well. Having a tea from freshly cut bamboo in the middle of the jungle is way better than any other tea! And how to prepare food in a jungle way?

We stuffed the bamboo vessel with mixed vegetables and chicken, purred some water inside and waited until everything was cooked. At the end, we cut the bamboo vessel in half using a machete. And lunch was ready! Trying a real bamboo cooking in the middle of the jungle was a truly extraordinal experience for me.

Well, I thought that you can find the most over-sugared drinks in the USA until I met these smiling grandams! They literally drink a sugar with tea! I was staring with my mouth open when I saw them pouring the sugar into a bamboo cup – they filled ¾ of a cup with sugar! Later on, they praise, how good it is!
Shaman is always right!

Even the Batek tribe has its own shaman. One of the women was wearing the necklace around her neck. She said she had been sick for a long time and this leave-necklace was a gift from the shaman to be cured. She can’t remove the necklace before shaman tells her, otherwise, the illness would come back. This tribe also doesn’t eat apples because the shaman said, that apples are not good for them.

What was the original settlement of Batek tribe?

Before Batek had to leave the jungle, they used to have campgrounds consisted of traditional shelters called ““. You can watch this video to find out how they were making them:

The way of life and Batek tribe income

The government forced Batek to become farmers, so their biggest income comes from the rubber. They also produce various rattan or bamboo handcraft such as rattan purses, bamboo combs, or small animal-look-like decorations. In terms of food, the Batek people are still largely dependent on rainforest production, such as fruits or and small animals which are hunted with a blowpipe. The organization, which I volunteer, for often hire Batek people as a jungle guides.

Scared to drive inside the car

Since most of the Batek people grew up in the rainforest, they have a natural fear of enclosed spaces. So they really hate to be closed in the car. When we were picked up by several guides for the jungle expedition, nobody wanted to sit inside. So, despite safety, they were riding on the back of the pickup.

Although Batek tribe of Malaysia may seem still untouched by the modern world, that isn’t completely true. Both – tablets and smartphones have already reached the jungle. And especially younger generation loves to play with smartphones.

In case you are going to Malaysia, nearby Taman Negara National Park and you would like to visit Batek tribe of Malaysia, don’t hesitate to contact me, I can give you more info by e-mail.