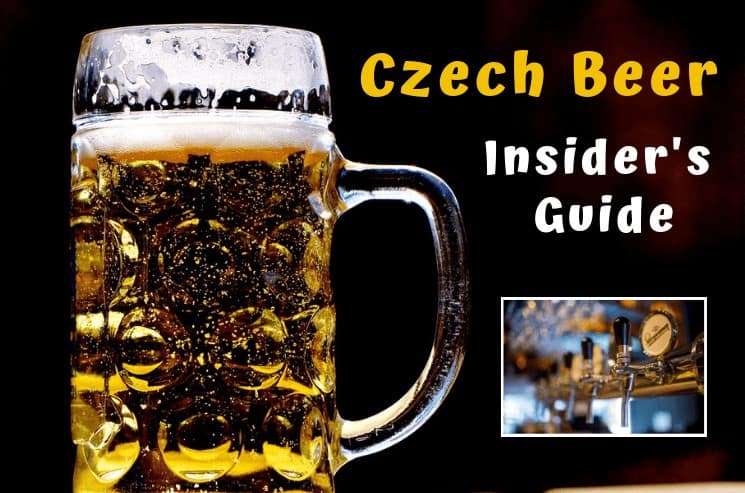 The Czech Republic is famous for its beer for a good reason. We are very proud of our beer and we say it's the best in the world.

You will find all you need to know about Czech Republic beer from Prague insider's point of view.

The vast majority of beer brewed in the Czech Republic is pilsner lager.

Strength is labeled by degree scale. It is expressed as a weight percentage of sucrose. Most of the time it means – the higher the degree the higher alcohol percentage and more bitter taste. The far most popular is 10° and 12°, but it can be just any degree between 7° and 18°.

Czech beer brands – which ones to taste?

Here you can find a broad survey on the quality of Czech beer brands. It's in Czech language but you can read the name and average rating of all brands. The more % the better beer based on Czech drinkers.

I will now go through all the most famous and most common Czech beer brands and write an average rating from the survey.

Probably the most well-known Czech beer all over the world. Pilsner (“Plzeň” in Czech language) is served in every other pub. It's stronger and more expensive (still very cheap).

It can be explained as “The Beer”. If you wanna drink just one or two beers, Pilsner is always a great choice. However, if you wanna spend the whole night in the pub and drink many beers, you should consider choosing other less strong brands. Otherwise, you will get drunk very quickly.

The brand that gives a name to the whole beer family – Pilsner. The world’s first pale lager gets its name from Czech 4th largest city Pilsen (Plzeň in Czech language).

Budweiser Budvar is a brewery in a Czech city of České Budějovice (Budweis in German). The beer has no relation to the American Budweiser, which stole the original name from the Czech brewery.

Budweiser is very popular among tourists. Most of the Czechs like it, some don't. However, you should definitely try it. It's one of the better quality beer brands (and it's much better than American Budweiser).

Famous Krušovice brewery was established by Rudolph II. It's a very unique beer which some Czechs like and some dislike or almost hate. It's worth trying though because it's different than the others.

Staropramen is one of the most spread and common beer brands in the Czech Republic. It's made in Staropramen brewery in Prague. The quality sometimes suffers, because it's provided in many low-tier restaurants.

It's very popular because it's one of the cheapest decent beers you can get. However, I would not recommend it as something special, it's just ordinary Czech beer (which is still better than most beers in the world).

Gambrinus is the best-selling beer in the Czech Republic. It has a lot of similarities with Staropramen. The quality also suffers, because it's provided in many low-tier restaurants.

Like Staropramen, it's very popular because it's one of the cheapest decent beers you can get. It's also very easy to drink for all occasions, so you can drink a lot of Gambrinus. I would also say that it's just an ordinary Czech bear – nothing special.

Kozel (which means “male goat” in Czech) from Velké Popovice is the favorite of many Czech students and Erasmus students in Prague (including me). It's one of the best beers you can buy in a bottle and its quality is usually decent even in low-tier pubs.

Its dark variety is probably the most popular dark beer in the Czech Republic.

Svijany is one of the oldest breweries in the Czech Republic (founded in 1534). Svijany bear is unique because it's an unpasteurized lager, which brings a unique “true” taste to the drink.

The basic Svijany beer is not as unusual, but there are many different special variants, which are very unique and definitely worth trying. I can say, that Svijany is one of my personal favorite beers.

Taste: bitter taste with a touch of citrus

Lobkowicz is not as spread and popular as Gambrinus or Staropramen, however, it's usually good quality. Lobkowitz is a safe bet beer. Nothing as amazing, but never disappoints.

Bernard is a family brewery dating back to the 16th century. The brewery was very small till 1991, but its popularity is rapidly rising since then. Bernard is unpasteurized beer and if you’re after a strong beer with a lot of personality, this is the brand to try. I personally love Bernard and go for it every time I see it.

Velvet is a beer special made Staropramen brewery. It's through amber beer with strong taste and little higher alcohol percentage than average Czech beer. It is inspired by an English recipe.

Velvet is not such a common beer, but if you see it, it's worth trying. It's different than the others and usually good quality.

Taste: very bitter and hoppy with a touch of citrus.

Braník is usually the single cheapest bottled beer you can buy in a supermarket and that's the reason, why is Braník popular between students. It's definitely not a great beer though and I would recommend other brands.

Braník is made with actual river water from the Vltava, giving it its distinct flavor.

Taste: lighter and sweeter than the typical Czech lager

Matuška is one of the youngest Czech breweries but it already gained a lot of following. It's a craft beer brewed as clean as possible with no added extracts or sugars.

What are the places to go during your Prague beer crawl? Let's have a look at the best restaurant and pubs:

U Vejvodů possesses a richly historic atmosphere that other bars in Prague can only hope to replicate. U Vejvodů is divided into two distinct levels that each have their own personality. On the lower level, there is the beer hall with photographs and Czech brewing other memorabilia from the glory days of Czech brewing and set to the tunes of classic Bohemian folk music. The upper floor is more pub-like with its modern music and younger crowds.

Lokál Dlouhááá is a popular retro style restaurant with a great quality Pilsner Urquell from tank. Lokál is great if you want not just to have a great beer but also to taste a typical Czech dish for dinner or lunch.

U Glaubiců is a famous historic restaurant (more than 700 years old). If you want to drink a great beer and try typical Czech food and simultaneously enjoy a bit of Prague history, U Glaubiců is a perfect place. This restaurant is also perfectly located directly on the walking route between Prague Castle and Charles Bridge.

Na Palmě is a local favorite beer pub. If you want to taste many different special Czech beers and enjoy drinking with locals, Na Palmě is the place to go!

If you love beer, you should definitely visit original Pilsner Urquell brewery in Pilsen (about an hour drive from Prague).

You can either drive on your own and book a tour directly in the brewery here.

Or you can take this day trip from Prague, which will take you to the brewery as well as Bohemia Glassmaking factory, which is the Czech Republic also famous for.

Visiting Staropramen brewery is a great alternative because it's located directly in Prague close to the city centre. You can book your beer tasting tour directly at Staropramen Brewery official website.

If you would like to take your taste on a journey around some of Prague's best drinking places and taste some traditional Czech snack food, this great evening tour is a must do!

Beer spa is another popular place, where beer lovers in Prague go. The best is Beer Spa Prague Bernard.

You can read this personal experience from Prague beer spa to get a better idea, how does it work.

I have prepared for you a map with all restaurants, pubs, beer spa, and tours from this article. You can also download the beer map and upload it to your mobile map app such as Maps.me or Locus Map.

How to order a Czech beer

Honestly, if you go to the pub, everybody knows you want a beer. However, there are some tips, which may come handy:

1) Czechs drink the most beer per capita in the world

The Czech Republic is on the top in every survey taken. According to this survey, Czechs drink 142.4 liters per capita. Which is more than a 12-oz. (355 ml) beer each day for every Czech man, woman, and child.

Beer in The Czech Republic is so cheap, that they needed to make an actual law, that there has to be at least one non-alcoholic drink cheaper than a beer in every restaurant! There used to be many restaurants, where even tap water was more expensive than a beer! Crazy but true!

3) The first brewery in the Czech Republic was opened in 993 AD.

The monastery in the Břevnov district of Prague started brewing beer in the 10th Century during the Kingdom of Bohemia.

This globally-known style of beer first appeared in the 19th century in Pilsner Urquell brewery in Plzeň (Pilsen in English).

Original Budweiser brewery is situated in Czech city České Budějovice (Budweis in the German language). Name Budweiser means “beer from České Budějovice”. German immigrant Adolphus Busch started a brewery in the USA afterward and named his flagship beer Budweiser. There were many legal battles to determine who has the legal right to use the Budweiser name.

Maybe you have encountered beer Žatecký Gus, which is impersonated as Czech beer (Žatec is a town in the Czech Republic). This beer has etiquette in the Czech language (with mistakes) and Czech adverts. Žatecký Gus is actually a Russian beer and not very good!

Places to visit in the Czech Republic:

Read our ultimate guide to the best places to visit in the Czech Republic:

Pin this for later and for your friends:

What are the best Czech Republic beer brands?

Is there a Prague beer map?

Yes, here you can find a downloadable Prague beer map.

What is the best beer spa in Prague?

What are the best beer restaurants in Prague?

Did this post about Czech beers help you? Share it with your friends! It can help them too!