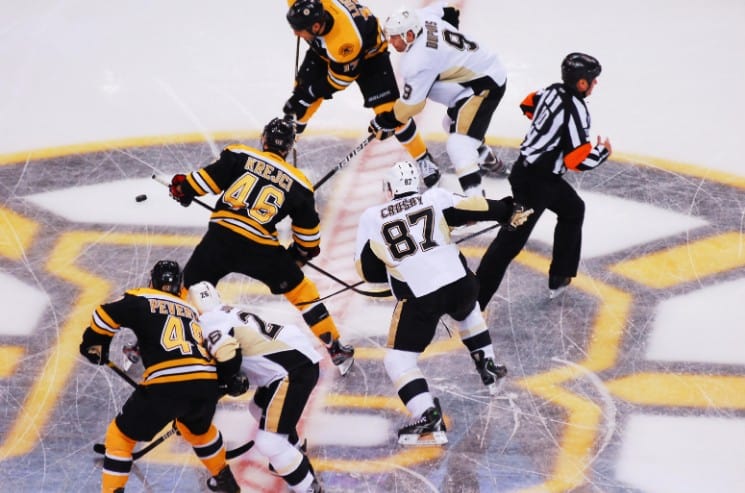 Are you wondering, how long is an ice hockey game? We have the answers for you! What is the official playing time? How long are the intermissions? What is the average total time of a game? What determines the length? How long were the longest games in history? Let’s dive right into it!

How long is the NHL ice hockey game?

The official playing time of ice hockey game is 60 minutes (three 20-minute periods). If it’s tied after 60 minutes, the play continues with overtime. The total average time of NHL game is 2 hours and 30 minutes (including stoppages and intermissions). It might be much longer if overtime is played.

How long are hockey games outside of the NHL?

The rules for the different leagues are quite similar, however, there are some differences, let's have a look at them:

The rules for international hockey (IIHF – International Ice Hockey Federation) are the same as in NHL – three 20-minute periods. The only difference is that the intermissions are only 15 minutes long.

How long are hockey games in other professional leagues?

The rules for most other professional leagues are the same as international rules. Three 20-minute periods and 15-minute intermissions.

Most minor leagues have the same rules as NHL – three 20-minute periods. The games are a little shorted just because of usually shorter intermissions and no commercial breaks.

How long is a minor league ice hockey game?

Most minor leagues have the exact same rules as NHL – three 20-minute periods with 18-minute intermissions. Followed by overtime and shootouts.

How long are high school and youth ice hockey games?

How long are recreational or kid’s hockey games?

At the recreational level and kid’s level, the game is usually played at runtime, which means that the timer doesn’t stop, when there is a whistle. The clocks run the whole time till the end of the period (except for some special occasions such as serious injury or technical problems with the rink).

This means, that recreational games usually last between 1 hour 15 minutes and 1 hour 30 minutes in total time.

How does the hockey game last in real-time on average?

The average total time of a National Hockey League game is around 2 hours and 30 minutes. This includes:

The vast majority of the games last between 2 hours and 20 minutes and 2 hours and 45 minutes.

The game can last much longer if it goes to the overtime, especially in the play-offs. The longest game ever played in NHL lasted 176 minutes of playing time (six overtime periods), which was around 6 hours of total time.

2 hours and 30 minutes is the most common scheduled time for broadcasting hockey games.

What determines the length of the hockey game?

The first important factor is playing time. The vast majority of games last 60 minutes of playing time, however, it might be less on some occasions. High school and kid’s games are shorter.

Commercial breaks are another factor, which prolongs the game. They are in all NHL games and in most other broadcasted games. NHL has three 2-minute commercial breaks each period, which makes it a total of 18 minutes of commercials during the game.

4) Whether the game goes to overtime

During the regular season, the game can go to overtime and shootouts, which might prolong the game by up to 30 minutes. It might be even much more during the playoffs as there are no shootouts. The longest games ever played took around 6 hours before the overtime goal was scored. Many fans in the building fell asleep. However, these are extremely rare, the vast majority of games are decided during the first or second overtime. Yet, even one overtime can prolong the game by up to one hour (including intermission).

Game flow has a great impact on the time as well. There are games, which are very fluent and referees almost never need to whistle. On the other hand, there are games with so many scrimmages, penalties, icings, offsides, etc., that there are just so many stoppages, which prolong the game significantly.

Ice-hockey is a hard-fought game and injuries happen. Most of the time, they don’t prolong the game much because the injured player just goes to the locker room and the game can continue. However, once in a while, there is a more serious injury that the player needs to be taken out of the rink on a stretcher, which prolongs the game.

Once in a while, there are some technical problems such as broken glass, melted ice, broken timer, etc. These can also prolong the game.

There are also pregame ceremonies during some games, which delay the start of the game by a few minutes.

How long is overtime?

If the game is tied after 60 minutes of play at the end of regulation time, the game continues to overtime. The extra time is played with the sudden-death rule, which means that the game ends immediately after one of the teams scores a goal. There are a few different rules for overtime:

All playoff games on IIHF tournaments are played 4 on 4.

How long are intermissions?

Commercial breaks are another factor, which prolongs the game. In the NHL game, there are three 2-minute commercial time-outs during each period. These are taken at the first stoppages of play after the 14:00, 10:00, and 6:00 marks in each period.

The commercial breaks can’t be taken in these situations (they are postponed to the next stoppage):

The commercial breaks are also used for cleaning the snow from the important zones of the ice (goal creases, in front of the benches and penalty boxes, around the circles).

The longest hockey games ever in NHL history

The longest hockey game ever played lasted whopping 176 minutes! It happened in the early hockey era in 1936 between Detroit Red Wings and Montreal Maroons. Mud Bruneteau was the lucky goal scorer. He scored in the 6th overtime period (9th total period).

The longest game of hockey in the modern post-expansion era lasted 152 minutes and happened in 2000 between Philadelphia Flyers and Pittsburgh Penguins. Keith Primeau scored in the 5th overtime period (8th total period).

List of the longest hockey games in NHL history:

How long before the game should fans arrive?

The good rule of thumb is to arrive around 45 minutes before the scheduled game time. Why this early? Well, you can arrive last minute, however, there are many things you might need or want to do before the game such as:

Did this article about how long is an ice hockey game help you? Pin it for later and to your friends:

How long is NHL ice-hockey game?

How long are recreational hockey games?

How long are recreational hockey games?

How long are kid's hockey games?

How long are kid's hockey games?

Did this article about how long is an ice hockey game help you? Share it to your friends!