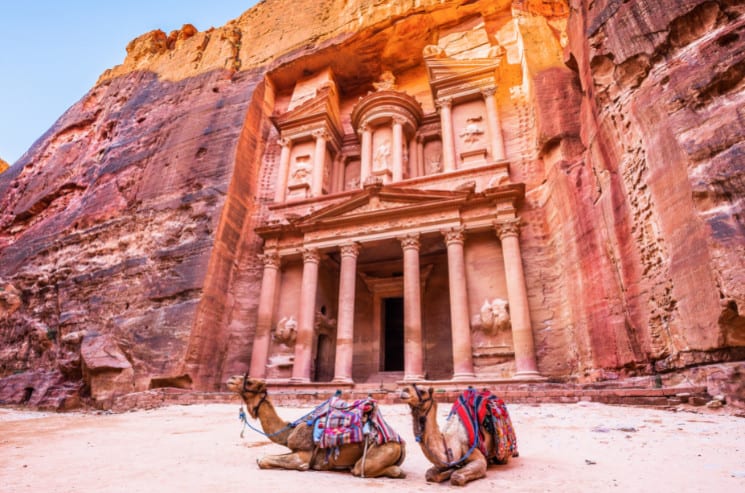 Jordan welcomed nearly 4 million tourists in 2017, and about half make the trek over to the country’s most famous attraction: Petra.

This ancient city is known for its mysterious rock tombs, jaw-dropping views, and unique Bedouin culture. Travelers come from all over the world to marvel at this Seventh Wonder of the World, and many more have it on their bucket list.

If you’re planning to travel to Jordan, it’s highly advised to look into the Jordan Pass, which acts as a tourist permit, a ticket to over 40 tourist attractions (including Petra), and much more.

Let’s start off with the history of this ancient city. Petra was built by different tribes and groups, and the history of the city goes back to 7000 BC! The first inhabitants were the Edomites, who settled here because Petra was an excellent water source.

From there, Petra was occupied by the Nabataeans, then the Romans, Byzantines, Crusaders, and finally modern-day locals.

In addition to the fact that this city was the center of trade in the region, it was also one of the most protected cities. The entrance to Petra starts from the narrow winding gorge of the Siq, which was heavily guarded throughout history.

Even nowadays, tourists have to pass through the 1.2-kilometer gorge before seeing the beauty of this city. Along the way, travelers can see small niches carved into the walls, which used to be tombs and areas to hold treasures.

One of the New Seven Wonders of the World

Although Petra was ‘discovered’ relatively recently (in 1812), it has already managed to make a name for itself on so many lists.

In 1985, the city was listed as a UNESCO World Heritage Site and, in 2007, it was chosen as one of the New Seven Wonders of the World.

Petra is one of the most unusual and unforgettable places in the world, so it’s no wonder why it shares this title with other greats like Chichen Itza, the Taj Mahal, and the Great Wall of China.

Who needs Silicon Valley when you have ancient Petra? In olden times, when there was still no developed technology, the local inhabitants of Nabatea created a complex water supply system in Petra.

Water was collected from all-mountain springs within a radius of 25 kilometers and flowed directly to the city through specially-laid tubes. Rainwater was also collected in the same way.

In addition to teaching other tribes how to collect water, the Nabateans also came up with a system to store it in such a dry climate. There were special stone tanks that received the water that came from the tubes and stored it until further use.

The collected water was enough for the population of the entire city and even camel caravans.

The City of Secrets

Petra is visited by a huge number of tourists every year, and it would seem that every centimeter has been studied here — but this is not actually the case.

Despite the fact that Petra has many visitors, only 15% of the city has been completely studied. This figure comprises more than 800 historical buildings and ruins, including churches, meeting places, and even residential buildings. Meanwhile, the rest of this great city is hidden under the sand and is yet to be fully ‘discovered.’

Due to such a huge number of centuries-old attractions, even tickets here are sold for a three-day period. After all, it’s very hard to fit the entire area in only one day of sightseeing.

A Treaty with the Bedouins

In order to allow tourists the ability to visit Petra, the Jordanian authorities had to negotiate with the indigenous Bedouins who lived in the city — and it cost a lot of effort.

Previously, the Bedouins who lived there kindled fires and cooked food right on the site of ancient mosaics and in traditional houses. The government managed to persuade them to allow entry to Petra for archaeologists and then tourists, on the condition that the Bedouins received the right to control the entire Petra and make their own rules.

According to these rules, cars are prohibited in Petra, and only carts, horses, camels, and donkeys may be used (including to transport tourists). While transport services are expensive, tourists still use them because there is no choice.

Such a unique city has attracted screenwriters and artists from all over the world, and it is not surprising — such unique architecture and atmosphere can not be found anywhere else.

In fact, Petra served as a backdrop for a large number of films. The most famous of them are “Indiana Jones and the Last Crusade” (1989, at the Al-Khazneh Temple), “Sinbad and the Eye of the Tiger” (1977), “Transformers: Revenge of the Fallen” (2012, Ad-Dair Temple) and many others.

However, the biggest popularity boost for this city came after the film “Indiana Jones” was released: the city was visited by more than 500,000 tourists immediately after the movie was shown in theaters.